I’ve recently developed a new addiction, no it’s not food, it’s not even reading about food.  Watching food shows? You got it!  But, this is no ordinary food show, this is Man v Food!  Since discovering this show on the Good Food channel I’ve been mesmorised by giant versions of real American cuisine, especially the giant cinnamon buns from Lulu’s Bakery in San Antonio!  As I don’t have a giant oven, giant rolling pin and access to the worlds biggest food mixer I decided to try my hand at the regular sized versions. 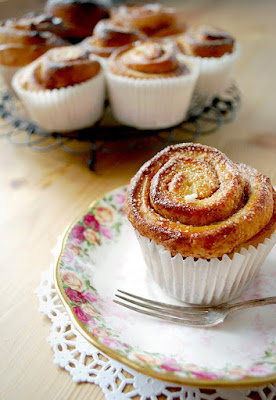 Is there anything better than a cinnamon bun fresh from the oven? If there is, I’ve yet to experience it.

Measure the milk into a glass or plastic jug and add the butter. Microwave on high for 2 minutes until warm. (Alternatively, put the milk and butter into a saucepan and put over a medium heat until the butter is melted and the mixture is warm.) Set aside.

Put the flour into a large bowl and add the salt, yeast and caster sugar. Pour the warm milk and butter into the flour mixture. Start mixing with a wooden spoon, then use your hands to mix the dough until it gradually forms a ball and leaves the sides of the bowl clean.

Lightly dust a clean work surface with flour and tip the dough out onto it. Stretch and pull the dough for 10 minutes until it is smooth and elastic. Cover the dough with a greased piece of cling film and set aside.

Make the filling. Weigh out 25g butter, put it in a small plastic or glass dish and microwave on high for 30 seconds to melt. (Or melt in a pan over a medium heat.) Put the rest of the butter in a bowl with the cinnamon, caster sugar and melted butter, and mix with a wooden spoon until smooth.

Take a large sheet of baking paper and put it onto a clean work surface. Sprinkle with flour, then take a rolling pin and lightly sprinkle it with flour. Uncover the dough and roll out on the baking paper to a large rectangle (about 30cm x 40cm).

Using a palette knife or flat-bladed knife (I found this part quite difficult so I got right in there with my mits and showed that dough some love), spread the cinnamon butter all over the dough, right up to the edges. Lift up the paper along the longest edge of the dough: as you lift, the dough should roll over. Keep lifting the paper until the cinnamon swirl is completely rolled, like a big Swiss roll.

Crack the egg into a bowl and mix with a fork. Brush over the cinnamon buns, then sprinkle with the crushed sugar cubes. Cover the whirls with a greased piece of cling film and leave to prove in a warm place for about 20 minutes.

Preheat the oven to 220°C/fan200°C/gas 7. Discard the cling film and bake the cinnamon swirls for 8 minutes, or until risen and golden brown. Allow to cool for at least 20 minutes before eating.