It’s May 25th and National Vegetarian Week is upon us.  In honor of this I haven’t touched meat since Monday, it’s been tough.  Hold on, it’s only Tuesday isn’t it? Hot damn! I wonder if I’ll stay strong enough to make it through.  A few weeks a go I asked a good friend, and one of the best veggie chefs I know, how he came to be such a great cook.  He told me it’s all part and parcel with being a vegetarian. Once you eliminate meat from your diet you have to start getting more creative with your tastes and textures, it’s the key to sticking it out.   So, till Sunday I will be saying good bye to the meat and hello to the colourful yumminess that is vegetarian cuisine.

To tell you the truth, it’s not that tough for me.  I’ve always been a big meat eater but growing up in a house with 3 boys and a vegetarian mother often meant that I’d be left with the veggie choice while the boys chowed down on sausages and bacon.  Over the years I came to prefer it, and will often go down the none meaty road to full tummyville when given the choice, I just like the taste and texture of meat too much to ever contemplate giving it up. 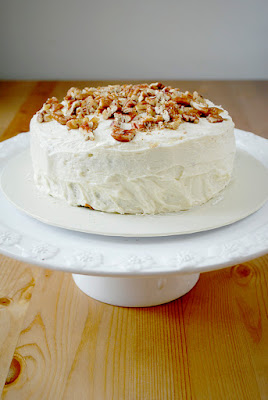 Anyway, I thought this was a perfect time to post a delicious vegan carrot cake.  Yup, no animal produce what so ever!  This cake was a breeze to make and baked up beautifully and the frosting was to die for.  Also, with no eggs and butter you can almost get away with eating twice as much 😉

For the frosting I used my cup measures, I’m not too sure why but for some reason to me it made sense at the time…

Sift the flour, baking powder and spices into a large bowl.

Melt the margarine in a pan, add the sugar and stir until dissolved.

Make a well in the flour mixture, then add the margarine and sugar. Mix in the carrots, banana and orange zest and juice.

Spoon the mixture into the prepared tin and level the top with the back of a spoon.

Bake for around 40 minutes until a skewer inserted into the center of the cake comes out clean. allow to cool before removing from the tin.

For the frosting cream the marg and cream cheese together till well mixed.

Add the icing sugar half a cup at a time, turning the mixer up to a high speed for several seconds between each addition.

Mix in vanilla extract and spread generously over the cake.