I was a little dubious about this recipe, as was everyone else when I told them I was making a sweet treat containing pumpkin. The general reaction was a furrowing of the brow, curling of the lip and the statement ‘remember the pumpkin brownies, Katie? Is that something you really want to recreate?’ Although my pumpkin brownies were a total failure I still couldn’t leave this one be, I mean Americans do love their pumpkin deserts and millions of people can’t be wrong! So, I went in search of canned pumpkin and ended up paying £3.50 in my local food hall. They better be worth it! 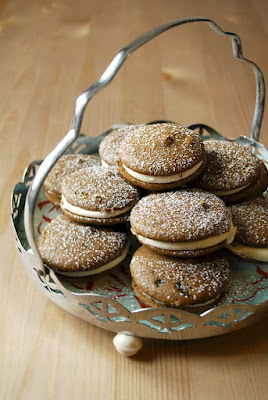 Once finished, I brought the cookie cakes into the living room, presenting them as nicely as I possibly could. Slowly, one by one, people approached the cookies and sheepishly took one. Looking at each other they raised them to their lips, closed their eyes and took a tentative nibble. I studied their faces, waiting for a reaction. The nervousness suddenly faded away and was replaced with delight! ‘Wow! They’re so spicy, can I have another?’ Yes, another winner! Thank you Sweet Melissa and thank you Debbie, if it wasn’t for you I’d have pushed pumpkin based treats aside, never to attempt again.

Have a lookie at the other SMS girls, Americans do it better 😉