At the beginning of this month my little brother turned 20! Yep, that means my ‘little brother’ is no longer a teenager. As I watched him blow out his 20 candles I finally felt my youth slip away, I think this moment hit me harder than the day I woke up on the wrong side of 25. I went straight to the bathroom and started hunting for grey hairs and wrinkles beginning to form around my eyes. My saving grace was a wonderfully rude cashier from ASDA a few days later. I trudged to the checkout, grasping a bottle of Sailor Jerry’s Rum between my aging fingers, I handed the bottle to the sour faced woman who placed it on the table next to her and asked in an accusing manner, ‘do you have any ID?’. It was like the sun had broken through my little grey cloud. I may well be on the fast track to my 30th but as long as I can be mistaken for an underage drinker I am a happy girl! 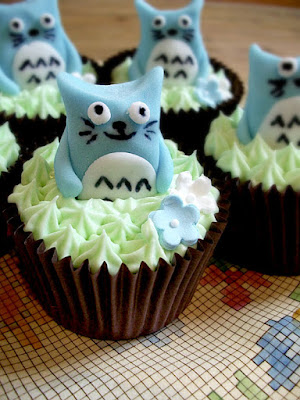 (I know, he looks more like a happy kitty than Totoro but he was my favorite!)

To celebrate my brothers transition into his 20’s I made him a batch of cupcakes topped with the adorable character Totoro! Totoro is a Studio Ghibli creation from the animated film My Neighbor Totoro and my brother loves him, well, him and anything else from the Japanese culture! I used a basic chocolate chip cupcake topped with peppermint cream cheese frosting and fondant sculpted Totoros. I got the idea from one of my very favorite food blogs A Cat in the Kitchen!